Binaural masking takes advantage of the interaural phase relationship between each ear to detect and identify tones and complex acoustic signals within noise. It is a measure the sensitivity using both ears. To understand this effect, we must first define the testing terminology and experimental scenarios of noise and signal presented to a listener. A monotonic configuration renders the stimuli to only one ear while diotic presents matching stimuli to both ears. The dichotic case presents two independent stimuli to each ear. The signal and noise cases are as follows:

Signal S and noise N are combined to demonstrate the benefits of binaural masking. SM Nm is monotonic, S0N0 and Sπ Nπ are diotic, and S0 Nπ, SπN0, and SπN0 are dichotic.
During both the diotic and monotonic cases, there is no binaural masking advantage. With the dichotic case, the listener benefits from the two different signals in each ear. For the Sπ N0 case¬, the noise is in phase with both ears, but the signal is out-of-phase. The phase shift in the signal causes the target to be lateralized to both ears while the noise is lateralized in the center of the head. The perceived different locations of the source and noise produce a masking level-difference of approximately 15 dB. The mirroring case, S0 Nπ, has a smaller level-difference benefit. 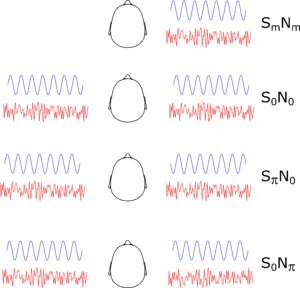 With the connection with interaural phase, it is a natural assumption that binaural masking level differences is directly related to interaural time differences. Both are frequency-dependent with a more pronounced differences in the low-frequency range and have decreased benefit with high frequencies.

Binaural masking also applies to more complex acoustic signals, such as speech. When in a noisy environment, the auditory system benefits from the separation of speech and noise. When the masker and the speech are in different locations, the listener perceives the speech as much as twice the loudness. The noise is shadowed by the head, yielding a pseudo-binaural masking level difference. Simply having both ears also allow the listeners to perceive the source louder; this is termed binaural summation or redundancy.