Bayesian filtering is a method for solving optimal filtering problems using Bayesian probability theory to estimate the state of a time-varying process or system which is observed through a noise-polluted signal. The state of a system refers to a collection of parameters which describe the behavior of a system. In Bayesian filtering problems, the state of the system is typically modeled as a Markovian chain with associated transition probabilities between states (see Appendix A).

Bayesian filtering is essentially a statistical inversion problem where a desired vector x must be estimated based on an observed signal y which is the summation of vector x with added noise. The goal is to use the observed sequence to produce an estimation of the hidden states. To do this in the Bayesian sense, this simply implies that the joint posterior PDF of all states given all observations must be computed,

is the predictive distribution of the state of

at time interval k, which can be calculated using the Chapman-Kolmogorov in eq. 1.2.

is the likelihood model for the observed sequence given

at each time interval k given the previous history of observations up to time k. Application which apply Bayesian theory, such as Kalman filters, can be implemented using the following procedure:

1. Initialization: Assume an initial state from the given prior distribution

2. Prediction: The predictive distribution of the state of x is calculated as follows.

at time interval k, the posterior PDF is calculated using eq 1.1, where the normalization constant can be calculated as:

Hidden Markov models (HMMs) are statistical-based models which can be used to prototype the behavior of non-stationary signal processes such as time-varying image sequences, music signals, and speech signals. Non-stationary characteristics of speech signals include two main categories: variations in spectral composition and variations in articulation rate. An HMM considers the probabilities associated with state observations and state transitions to model these variations. 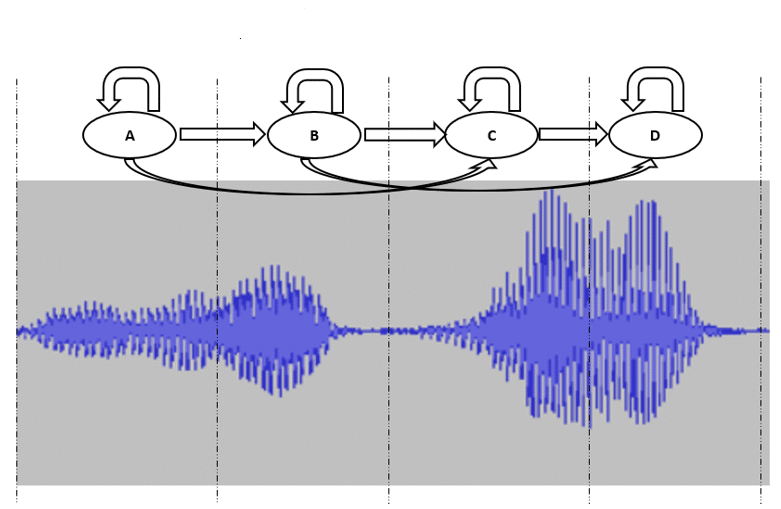