Including Physical Layer Security (PLS) into a wireless communications system design more often is becoming a requirement.  Currently, security is handled in the upper layers of the OSI model, such as Transport Layer Security (TLS) cryptographic protocol.  TLS uses symmetric encryption, but requires public-key encryption to share the session key to be used by each party.  Eventually, quantum computing will break public key encryption schemes, rendering them useless.  Low power quantum resistant solutions will be required.

This is where PLS enters the picture.  Confidentiality, authentication and integrity of a communication can be achieved by relying on the fundamentals of signal processing and information theory.  When the SNR is higher at the destination’s receiver then at an eavesdropper’s, secrecy capacity of the channel is non-zero.  Beamforming has long been used in wireless communications to focus the transmission power in the direction of a desired receiver to improve the SNR.  Therefore, multi-antenna beamforming provides increased level of security compared to a single antenna.  The inverse of beamforming, nullforming, can be used to further increase the secrecy capacity.  Nullforming attenuates the transmission power in a specified direction.  Transmitting artificial noise in all directions other than the destination will comparatively lower the SNR for non-intended receivers.  Beamforming and Nullforming provide a great starting point for physical layer security for multi-antenna wireless communication devices.  Techniques such as precoding and fingerprinting can be used for further security. 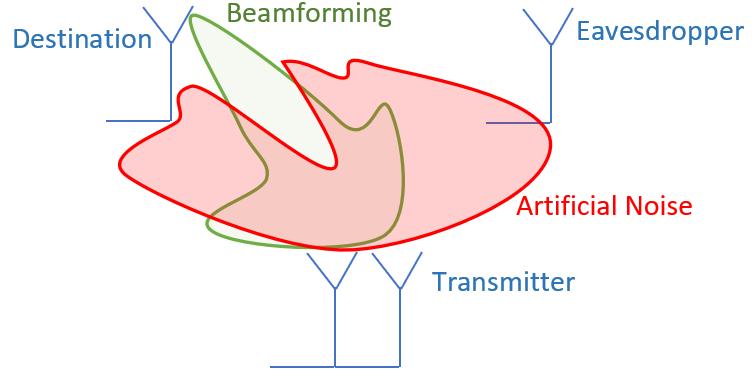