The Hilbert transform plays a significant role in signal processing and many other  areas of science and engineering such as seismology and medical applications. Examples of applications in signal processing include determination of signal envelopes, regularization of convergence problems in multi-channel acoustic echo cancellation, sampling of bandpass signals for communication, and implementation of modulators. 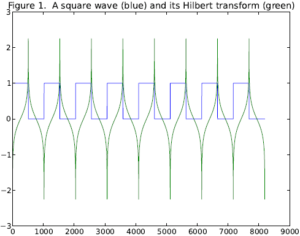 where P refers to the Cauchy principal value.

To ameliorate this effect, various windowed FIR Hilbert transformers (for example, Bartlett, Hanning, and Kaiser) are used. The properties of Hilbert transformers depend on the coefficients of their impulse response. Essentially, their performance steers a tradeoff between rms ripple amplitude reduction and passband reduction and/or width of transition passband. However, most often, suitable parameter choices yield acceptable results for signal processing applications.

Using these fast FFT based Hilbert transformers, VOCAL can effectively perform operation such as spectral peak determination or modulation domain processing. Contact us today to learn how our extensive knowledge of signal processing applications can help you.