JPEG2000 is the most recent image compression standard from both the Joint Picture Estimation Group and the ITU. There are several parts to the JPEG compression algorithm, including a color transform, tiling, wavelet transform, quantization and MQ arithmetic coding. All of these portions of the algorithm play a part in reducing the amount of information needed to represent an image while maintaining an acceptable level of distortion (including an option for lossless encoding). This paper will focus on the wavelet transform including why it is important and the role it plays in the compression and error resiliency of an image.

Though it is commonly referred to as a wavelet transform, JPEG2000 more realistically uses a discrete wavelet transform (DWT) implementation of a subband transform. The theory behind the subband transform is that the image (or more specifically each tile of the image) is progressively sampled using a bank of low pass filters. The structure of the filtering is shown in the figure below, where L or H refer to lowpass or highpass filtering in either the horizontal or vertical direction. The subscript refers the the level of the filtering. At each level of filtering, the low pass portion (LL) is recursively filtered using the same scheme. 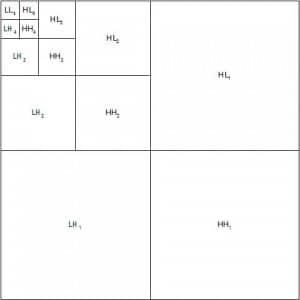 The purposes of the DWT transform is that most of the information within the image is going to be included in the low frequency components, while the high frequency components will be more sparse. This corresponds to what the human eye notices in images. There are two important outcomes of this. First, the majority of the image (representing high frequency information) is very compressible, since there is a lot of redundant information in these portions of the image. Second, since the subbands are interdependent in only one direction, it is possible to only decode a portion of the image at lower quality, allowing for scalability at the decoder (or within a network at an intermediate node) without having to decode and re-encode the image. This is an important feature of JPEG2000 that was not possible with traditional JPEG, and has many important applications on networking of handheld devices and in distortion based networking.