This non-linearity comes in two flavors: with memory and without.

is a non-linear map without memory that is parameterized by

, thus making up the Hammerstein portion of the block. Then

is a linear transfer function parameterized by

. For acoustic echo cancellation, ut represents the far-end speech, and yt represents the estimate of the desired signal. The effective use of this type of system then depends on your ability to accurately and stably estimate the parameters. There are currently a variety of methods available.

A volterra filter of order N can be described as:

Neural Networks can be used to learn the echo path. An example is shown in Figure 3: 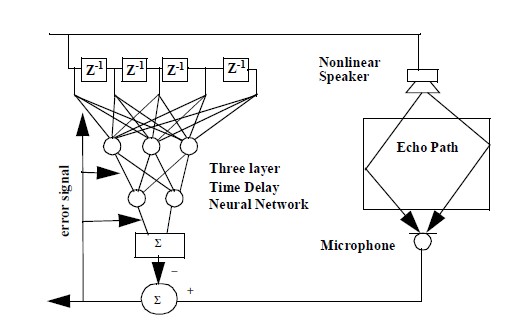 Such a network can be trained by back-propagation. In this algorithm, we let xj be the total input to neuron j, yi be its ith output, with a weight wji:

The output of this neuron can be any function of its inputs, but originally [4], a sigmoid was used in accordance to what we see in nature. The idea is to find the wji such that a desired response is produced when given an input. To do this, we try to minimize the sum of the squared errors:

Where c denotes an input-output pair, y is the estimated signal, and d is the desired signal. To find how the weights influence the output, as to correct for the error, we find:

Then to update the weights, we use a 1-st order recursive learning rule that alters their convergence rate rather than their actual value:

Non-linearity can be modeled more generally by any non-linear function placed in the parallel to the echo path. For instance, one approach is to use a hard clipper, defined as:

This equation is typically used to model saturation non-linearities in the loudpseaker or microphone, as is a sigmoid function. Alternatively, you might choose to model the loudspeaker coil as a first order differential system through its counter electromotive force. Temperature drift can be modeled with directed or bridged Brownian motion. The most general mapping can be found by fitting autoregressive integrated moving average (ARIMA) models to the residual echo that results after the FIR filter.

The most pressing questions in designing a non-linear acoustic echo canceller are what non-linear model to use, and where to place that model in the echo path. Complicating things is the notion that the echo path itself may not be entirely linear. Assuming it is linear, you have the option of placing it before, after, or in place of the standard FIR adaptive filter. The placement should then keep in mind the non-linearity you are trying to capture. For instance, a model of the loudspeaker coil should be placed before the FIR fiter, but a model of microphone clipping should be placed afterwards. Neural networks offer the most flexibility when it comes to identifying non-linearity. As [3] shows, the TDLFFN illustrated in Figure 3 can be used alone or in cascade with a standard FIR filter adapted by NLMS. In addition, there are a variety of learning algorithms illustrated in the literature that can be used alone or in combination. With Neural Networks, the possibilities are almost endless.

[2] A. Wills, B. Ninness, “Estimation of Generalized Hammerstein-Wiener Systems,” presented at the 15th IAC Symposium on System Identification, Saint-Malo, France, 2009.