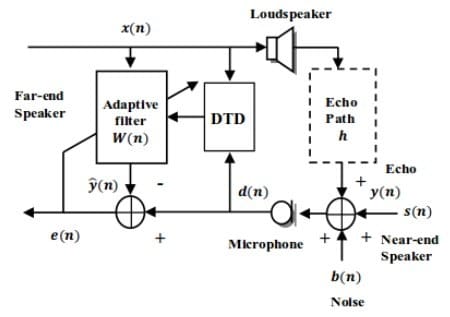 In [1], the authors used simple time domain criteria to create vectors as input to the similarity metric. As the metric, they used the standard Euclidean distance. The vector of features for the incoming far end speech frame x is given by:

Where En and Es are the frame energy and frame log-energy respectively, and the {ai} are optimized constants given in [1]. Computing a similar vector Vd for the near end signal, the decision variable was given as:

Where ob is the estimated variance of the noise, and ß is a constant also given in [1]. Under voiced speech, this decision variable was compared with a given threshold, and under unvoiced speech, the variable as compared with another threshold. From here, the decision was made. The authors show that using speech features for double talk detection is a useful method, as their double talk detector outperformed both the normalized cross-correlation and Geigel algorithms.

The speech features given in [1] were largely dependent on the energy of the signal. This means that the performance of this double talk detector will severely degrade under noise. In addition, the reliance on an decision threshold that varies between voiced and unvoiced speech presents another dimension of error that may degrade the performance even more. Using VOCAL Technologies superior understanding of speech features, we can offer much superior performance in the presence of noise, reverberation, and non-linearities.